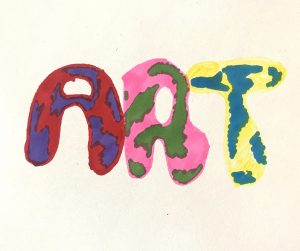 Original drawing of the work ‘ART’ by Chinaleigh

Gwen gets to know members of Salford Youth Council. Their conversation begins by discussing ‘What is NOT art?’

Getting to know each other – the importance of listening

In November I started attending meetings of Salford Youth Council (SYC), a youth voice group for anyone aged 11-21 who lives, is educated, or works in Salford. The group meet on a weekly basis, to plan events, work on campaigns, and promote positive stories of young people in Salford. SYC are the home of the Young Mayor and Member of Youth Parliament for Salford.

When I first joined the group I began by listening, and joining in conversation when appropriate. I was there to get to know the group, its members and to start to understand how the groups works.

SYC were working on a range of projects, including how to tackle hate crime, child obesity and sexual harassment in schools. They began work on a photo project for Holocaust Memorial Day, they had to take images and write a caption to the prompt – ‘One day…’. The group came up with some brilliant images and captions. I joined in to review the images each week and then the group would go out and take more images. Some people knew how they wanted to caption their images, but sometimes the whole group would collaborate to produce a caption that everyone agreed on. One member of the group is a wordsmith and wrote incredibly poetic captions for other people’s images.

The images were shared at an event as part of Holocaust Memorial Day remembrance in Salford. You can view the images being read by member of the group, and Salford Young Mayor, Rosie https://twitter.com/salfordyouth1/status/1486807661211537411

Questioning is so important – what is NOT art?

In January I started working directly with members of the group. In the first session we had Amber, Alex, Chinaleigh and Ollie. As a place to start from I asked them ‘What is NOT art?’ which prompted a passionate and wide-ranging discussion. I recorded the conversation and have written up what they said. The group also had a roll of paper to write their responses or draw on if they preferred to contribute that way.

Ollie said ‘nothing is art – literally nothing. Nothing is not art, but nothing is also art.’

Alex said ‘absence of anything is art, if someone can find some kind of meaning to it or feels something then it’s probably art.’

We agreed that anything can be art – so I took them back to the original question – what is not art?

‘I was going to say things that you can’t feel or see, something that doesn’t make you feel something’

‘You can put a filing cabinet in an empty room and someone will find a message in it.’

‘Is destruction art?’ – ‘I think the general consensus is yeah’

Amber said ‘my favourite artist uses the pain he has gone through in life to create his art. I think that’s really cool’.

I asked can the messages in the making of the art be different to the message the audience gets from the art?

‘Everyone can bring their own meanings’

Chinaleigh said ‘so like a poppy, people could say it’s for rememberace and stuff for the soldiers, but it could also be red for blood’.

One the walls of the room we were sat in were some medical drawings, so I asked is medicine art?

‘It can be. Science is a pretty artistic thing. Science is art – you have to draw everything out like lungs and things’

‘But when you think about it, everything is art, cos art is such a varied thing’.

‘That is really subjective’ (x2)

So, thinking about the University of Salford Art Collection, I asked them, if you were in charge how would you decide which art is good art and which art is bad art?

‘If you want to reach as many people as possible, the people deciding should be a group with totally different interests and stuff’

‘You need a variety of people deciding, unless there is a theme’.

While we were talking, Chinaleigh, who is a cadet and had come straight from training, she was dressed in a green camouflage uniform, drew this brilliant graphic image of the word ‘art’. I love it and have made it into a sticker for her and to share with the groups.