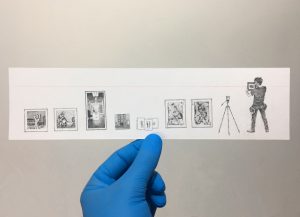 Acknowledging disparity is the first step to addressing it, or ignoring it, however Ignoring it usually makes it look worse. 2020 Richard Shields Pencil on Fabriano Accademia off cut. 7.5 x 29.5 cm

Salford based artist and art handler Richard Shields has produced a new drawing of a technician installing an imagined exhibition of works from the Art Collection. Part of his ‘Technical Drawings’ series – which seek to expose the ‘hidden processes in exhibition production’.

“When writing about my practice I often state that I’m doing a ‘residency in my own life’ and this recent series of works is no exception. Perhaps someday I will make drawings about lounging by the pool in my second home but for now I’m making drawings about being an art handler and my observations within the arts. The drawings are small, you can look at them on your phone at their original scale, then scroll past. Maybe the next post will be a meme with an art technician struggling on a ladder. Since the outbreak of Covid-19 there has been little art handling going on due to the closure of art spaces and the risks in going anywhere.

For the micro commission I proposed a scenario where an art handler would be installing works that said something about Salford and the Art Collection. As a technician who often works closely with curators installing other artist’s work, I wanted to recreate that dynamic currently off the cards due to the virus. I asked Stephanie to select the work for my depicted technician to install. Some of the artists selected were old friends and acquaintances, former studio colleagues, all were from the surrounding area.

The technician uses a laser level to mark a midpoint all the pictures will be hung at. However, the sophisticated device highlights a sloping floor that can often trick the viewer into thinking the work isn’t straight. In a way the drawing is a show that isn’t happening in the normal sense but instead joins the ranks of online degree shows and other nonphysical events offering an imperfect lifeline to artists and galleries during the pandemic.

In recent years Salford has offered artists shelter and support where they have otherwise been neglected. It isn’t as wealthy as some places but it has shown its potential to those who are prepared to work with its issues. Beyond the arts ecology it is a city that suffers from great poverty but also enjoys great investment that can boost the surrounding areas or highlight the disparity.”

Acknowledging disparity is the first step to addressing it, or ignoring it, however Ignoring it usually makes it look worse. 2020 Richard Shields Pencil on Fabriano Accademia off cut. 7.5 x 29.5 cm

“Though presented online, Richards’s detailed drawing offers something of an alternative to the straight-to-digital exhibition making that’s happening a lot now. The artworks we chose are all connected to Salford – a little love letter to the city while we’re still working remotely. I miss the camaraderie of working on site with our technicians, spending time carefully devising and installing exhibitions – fussing over a few millimetres here or there to get it ‘just right’…

It’s exciting that museums and galleries are starting to open again, though the future is still uncertain for many. Please check out and support campaigns such as #WeMakeEvents and the #ArtistTechnicianEmergencyFund which highlight how these crucial – but often precarious – ‘behind the scenes’ roles in our sector are being hugely impacted by Covid.”

From left to right, the featured works from the Collection include:

November 2020: Limited edition prints & t-shirts now available!
The drawing has been released as limited edition of 5 signed print (£80 + P&P) or as a printed t-shirt (£30 + P&P) available to purchase directly from the artist. Please visit Richard’s website to find out more and order, or contact him via Twitter / Instagram. 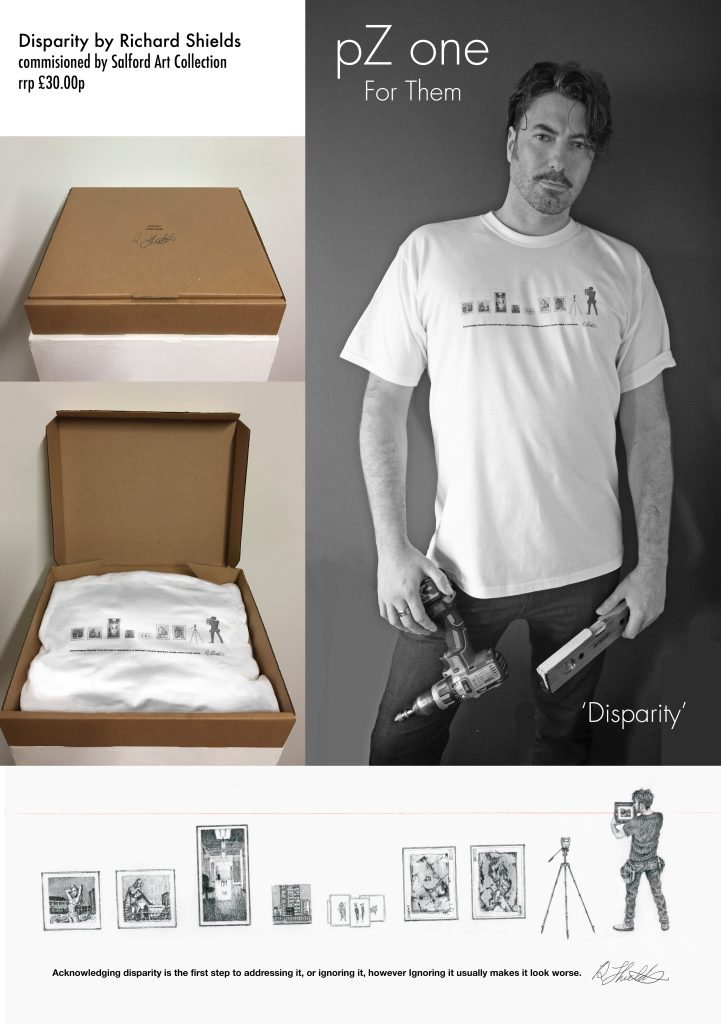 Richard lives between Manchester and London and works out of a studio in Paradise Works, Salford. He has been delivering a series of performances featuring an Opera about excuses artists hear when they are let down and a reimagining of The Emperor’s New Clothes, where the Emperor struggles with mental health issues as he chases ‘artworld’ success via social media.