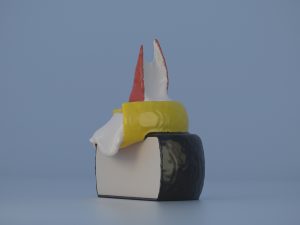 Part of the Spring micro-commission series

“My work for the micro commission takes its starting point from a body of work that I created a few years ago, the Cheese series, some of which is now in the University of Salford Art Collection. (I was somewhat uncomfortable using my own practice as a beginning, but equally would have struggled with the problems of using someone else’s work as a source or starting point.)

For some time now I’ve wanted to engage with new fluid dynamics software. And the micro commission afforded me this opportunity. The premise for my work for the micro commission was a simple one. Through the use of fluid dynamics software, to get a computer to simulate the melting of an object that I’d made in a previous artwork. (Original artwork, ‘Stacked Cheese’, 2015)

So, I got the computer to melt an assemblage of virtual minimal cheese.

Anyone who enjoys mainstream cinema will be aware of the 3D software and it’s accompanying fluid dynamics software that I use. (It is used in films such as the Harry Potter series or any of the recent Marvel films.) This software is fully capable of simulating the movement of all manner of fluids, from large body liquids like a sea, river, waterfall. To smaller scale liquid from a tap or glass, blood, paint or metal, to gases, smoke, cloud and fire.

In terms of the future and as a direct result of receiving the micro commission, I have already begun two new works that involve the use of the fluid dynamics software.”

Watch the new video below:
(click the arrows in the bottom right for full screen)

“The context of the pandemic is perhaps a good moment for pause and reflection of the reality – or surreality – of the world around us. For the Art Collection, Flynn’s re-interpretation is a mischievous and playful encounter, which highlights the fact that contemporary collections are not necessarily fixed objects but are living, moving, changeable things”

Pat Flynn is an artist based in Greater Manchester. His realistic, digitally-rendered work focuses on “how we understand ourselves in light of mass media and commodity: the seduction, security, rituals and belief systems that transpire from mass production and consumer culture”. His work draws on ideologies, processes, themes and sentiments found in Hollywood films, computer games, consumer goods and advertising.