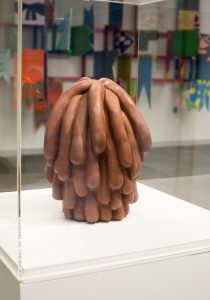 Willow Rowlands, A Way of Organising a Pig, 2015. Photograph by Steve Iles.

Willow Rowlands, A Way of Organising a Pig

A Way of Organising a Pig was a gift from the artist, through the University of Salford Art Collection and School of Arts and Media Graduate Programme.  Visual Arts graduate Willow Rowlands was one of the first participants on the programme in 2014.

Artist Rowlands plays with form and function; questioning the meaning and purpose of materials as they are used, re-used and re-interpreted in different ways.  Her sculpture A Way of Organising a Pig is part of a series in sculpture, image and film which are “confused in their state of being and intention” – the object may be reminiscent of “a pile of sausages, a succulent plant, a hairstyle and a cephalopod (squid). It is a stimulant for further thought, rather than a puzzle to be solved.” Rowlands explains that “the most important word in the title is ‘organising’.”

Rowlands has continued to develop her practice, particularly in film based works, and is undertaking an MA in Fine Art at Manchester Metropolitan University.

A Way of Organising a Pig recently exhibited in Acquired: a century of collecting at Salford Museum and Art Gallery, Salford UK (November 2018 -June 2019), and was also on display in group exhibition Synthesis, New Adelphi Exhibition Gallery, University of Salford, UK (2017).