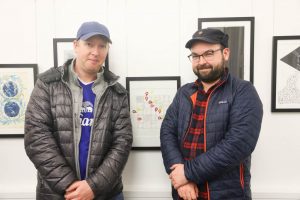 A reflection on Acquired: a century of collecting

Richard Benbow, BA Fine Art student, reflects on the Acquired: a century of collecting celebratory event, that took place on 6 March 2019, and on the role Salford Museum and Art Gallery has played in his life:

I first started going to galleries because, not only have I enjoyed looking at Art and had an enquiring mind but it was a free thing to do and somewhere I could go and spend a couple of hours there and lose myself for a while. I discovered Salford Museum and Art Gallery some years ago now and often had a trip up to Salford specifically to come to the gallery.

When I started working with Adults with Learning Disabilities I often took clients to Salford Museum and Art Gallery and others across the North West – Bolton, Manchester and Liverpool also. Then my interest in art gathered further and I decided to do an Art Foundation at Wigan and hey presto I was at Salford University before I even knew it.

So when I had the opportunity to do a print for the collection for my Professional Context and Studio Practice Units I thought this is my chance. I chose to respond to Chris Paul Daniels and Sam Meech’s film – One Square Mile, because it was contemporary and the film makers were based in the area. Not only did I want to make connections in the art world but I wanted to champion an amazing piece of art that complemented my own practice and could lead me onto greater things.

The whole process was really amazing from the research, contacting the curator for information about the film, researching the film and artists on the Internet, and going to the gallery to watch the film itself was really absorbing. Not to mention coming up with the idea of how to respond to the film, drafting a drawing, trialing a print, working with a demonstrator from the university to hone my skills and perfect my response by using Adobe illustrator.

I felt very conscious that I could not blow this opportunity and felt under a certain amount of pressure to come up with something good. I didn’t want to let down my self or my tutor and the team that supports me because they had faith in me to offer me this opportunity and let me follow it through.

It was great to see the other students working in the studios and speak with them and give them positive encouragement and feedback about their on-going responses. It was a real pleasure to exhibit with them and the tutors and be part of the Acquired: a century of collecting exhibition which has some real gems in the collection.

The writing side of things was really good as well, as we were able to step back and analyse the work we were responding to and how our work added further comment to this.

I feel I learned a lot from this opportunity and it was fantastic to meet the City Mayor of Salford (Paul Dennett) and tell him a bit about myself and my work and to meet Chris Paul Daniels on the night too and then see how enthusiastic he was about my response.

In summary this was a great opportunity which I grasped with both hands, it did not come without pressure or expectation but if we are able to drive ourselves in the right manner we can thrive off this positive stress and grow as artists.