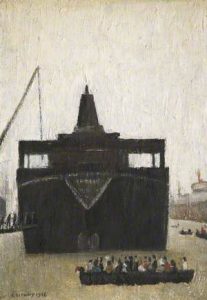 L.S. Lowry, Narcia fitting out at the Tyne

Although best known for his mill scenes and industrial landscapes, Lowry’s work covers a wide range of themes and subjects, from landscapes and seascapes to portraits and surreal imaginings.   He studied painting and drawing in the evenings at the Municipal College of Art (1905–15), and at Salford School of Art (1915–25), while working as a rent collector during the day.

His initial drawings were made outdoors, on the spot, often rough sketches on the back of an envelope or whatever scrap of paper was to hand.  More finished drawings were made later and, after about 1910, he only ever painted at home in what he referred to as his workroom, rather than his studio. His palette was very restricted and he used only five colours – flake white, ivory black, vermilion (red), Prussian blue and yellow ochre.

Lowry died at the age of 88, just months before a retrospective exhibition opened at the Royal Academy, London.

Narcia fitting out at the Tyne was purchased by the Collection in 1971. Lowry enjoyed holidaying in the North East of England and drew and painted many ships on the Tyne.