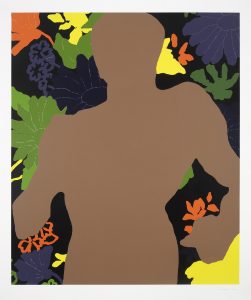 Hume graduated from Goldsmiths College in 1988 and came to prominence during the early 1990s as a member of the Young British Artists (YBAs).

Inspired by the Lou Reed song Vicious Hume was especially intrigued by the opening lyric “you hit me with a flower”. He overlaid a dark silhouette, derived from an athletic statue of Mussolini, on a background of vibrant flowers, creating an attractive and decorative image from the idea of violent beauty.