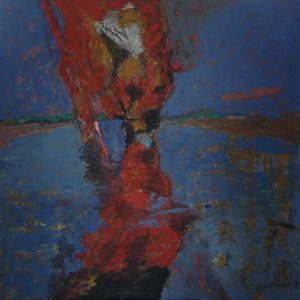 Adams was denied access to formal arts education in South Africa due to apartheid policy, and moved to London in 1953 to undertake a scholarship at the Slade School of Art. Here he met Salford based artist Harold Riley, first visiting Salford to stay with Riley’s family over Christmas. After returning to South Africa several times between 1959 and the 1990s, Adams eventually settled permanently in London and taught at schools and colleges.

A rotating selection of Adams’ works is on permanent display in the Albert Adams Room in The Old Fire Station, University of Salford, renamed in honour of the artist in February 2015.

Purchased with Art Fund support, made possible with the generosity of Edward Glennon.