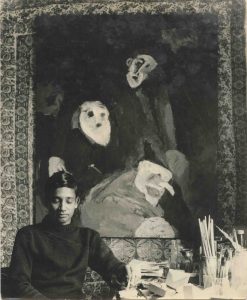 In the studio. Image (c) the artist's estate.

The University holds a significant collection of prints, paintings and studio objects by South African Expressionist artist Albert Adams (b. 1929 Johannesburg, d. 2006 London). The works were both purchased and generously donated by Adam’s surviving partner Edward (Ted) Glennon in 2012, with support from the Art Fund.

Adams, who was of African and Indian heritage, was denied access to formal arts education in South Africa due to apartheid policy. He moved to London in 1953 to undertake a scholarship at the Slade School of Art; here he met Salford based artist Harold Riley, first visiting Salford to stay with Riley’s family over Christmas. After returning to South Africa several times between 1959 and the 1990s, Adams eventually settled permanently in London and taught at schools and colleges.

A selection of Adams’ works is on permanent display in the Albert Adams Room in The Old Fire Station, University of Salford, renamed in honour of the artist in February 2015.

In Spring 2020 Dr Alice Correia, Research Fellow in Art History at the School of Arts and Media, was successful in a small funding bid to the Paul Mellon Centre for Studies in British Art. This grant will support research and a workshop in early 2021 to share Adams’ work with a wider sector audience.

Purchased with Art Fund support, made possible with the generosity of Edward Glennon.