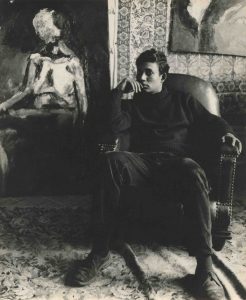 Albert Adams in his studio. Courtesy the artists' estate

Book now for free tickets to the Albert Adams: In Context symposium, led by Dr. Alice Correia.
Internationally renowned curators, art historians and researchers delve into the context in which Albert Adams lived and worked.

We are delighted to announce the Albert Adams: In Context Symposium will take place on the 9th of March 2022. Free tickets can now be booked ahead of the half-day, online symposium in which a panel of internationally renowned curators, art historians and researchers shall discuss themes around the life and work of London-based South African expressionist artist Albert Adams (1929-2006).

Hosted by Dr. Alice Correia, the study day will touch on a range of topics from self-portraiture, post-war painting, expressionist printmaking, Black modernism, masculinity and sexuality, and the South African artistic community in London.

Who was Albert Adams?

Having been denied access to formal arts education in South Africa due to apartheid policy, Adams moved to London in 1953 to undertake a scholarship at the Slade School of Art.

Within the Collection, we hold a significant body of Albert Adam’s prints, paintings, and studio objects both purchased and generously donated by Adam’s surviving partner Edward (Ted) Glennon in 2012, with support from the Art Fund.

Read more about Albert and the special collection here.

Plus – we will be releasing new poetry written in response to Adam’s work by Professor Jackie Kay CBE, former Chancellor and writer-in-residence at the University of Salford.

Additionally, as part of our ongoing digitisation project, later this month we will be launching our online digital catalogue, making the work in our collection available for all to access online. Ahead of the symposium, we shall be focusing on Adam’s work, showcasing pieces in our collection both as part of the catalogue and on social media. Stay tuned for more information about the digital catalogue launch.

“This half-day workshop will be an incredible opportunity to learn more about the little-known artist Albert Adams. During his lifetime, Adams’ work was overlooked by the art-world establishment; we will be joined by a group of pre-eminent art historians and curators, who will reflect on the various contexts in which he lived and worked: We’ll discuss Adams’ experience of Apartheid South Africa; his identity as a gay, black man in London during the 1950s and 60s; as well as his engagement with modernist painting and printmaking techniques. We look forward to welcoming everyone for an afternoon of lively and collaborative discussions” – Dr Alice Correia

“We are honoured to hold one of the largest existing archives of Adam’s work, and hope this study day brings his work the wider recognition and audiences it deserves” -Stephanie Fletcher, Assistant Curator, University of Salford Art Collection

The Albert Adams: In Context symposium and exhibition is convened by Dr Alice Correia, in collaboration with the University of Salford Art Collection.

Supported by the Paul Mellon Centre for Studies in British Art and by a donor funded Salford Advantage Grant.

The Albert Adams collection is presented by Edward Glennon through the Art Fund.