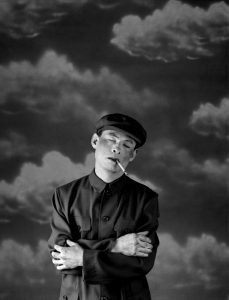 The core of the Some Days series is based on the artist’s memories of childhood and family, Chinese culture, and the Cultural Revolution, which have been interpreted and abstracted to read at a level of collective consciousness.  Through these photographs, Wang Ningde has reordered his experiences and given them a new form, creating a surreal world that lies somewhere between reality and memory. This dream-like imagery is only heightened by the fact that all of Wang Ningde’s subjects have their eyes shut, as if they are meditating or reminiscing. The mood throughout Some Days is melancholic and introspective, and while the photos may feel like scenes from a silent movie, the personalities of the subjects themselves are impossible to read. In Wang Ningde’s world, individuality is stripped away, as is the real moment in time when the photograph was made. With an acute sensitivity, the artist is able to recreate and distill his past from the inside out.

In Some Days No. 03 a man dressed in a collared jacket stands with his arms folded across his chest. His held tilts gently to one side, while a long cigarette is held gently between his lips. His eyes are closed, and it would seem that he is asleep. Behind him, the sky is filled with billowing clouds, creating a dream-like setting. The man, although physically present, is also elsewhere, lost in his own private thoughts, dreams, or memories. The photograph, Some Days No. 03 gestures toward unfulfilled yearnings, longings and desires and suggests that outward appearances can only ever give a partial glimpse of the person within.

‘Good art, according to Wang Ningde, is about casting a ray of illumination. He hopes his series, Some Days, will in some way bring about a moment of clarity for the audience, not by providing easy, ready-made answers, but by aiding the individual in the processes of thought and imagination, remembrance and understanding. It is only through comprehension of ourselves and our own histories that Wang Ningde believes individual diversity can be guaranteed’. Source: http://wangningde.com/article/1035

Wang Ningde graduated from the photography department of the Lu Xun Academy of Art in 1995. After graduating, he moved to southern China where he worked for a decade as a photojournalist during the period of China’s explosive economic and cultural transformation. Departing from documentary photography, Wang returned to his northern hometown to began his Some Days series, which he worked on between 1999 and 2009’. Source: https://www.artspace.com/wang_ningde

TimeOut Shanghai Interview with artist on Some Days Series: http://www.timeoutshanghai.com/features/Art-Art/1463/Interview-Wang-Ningde.html