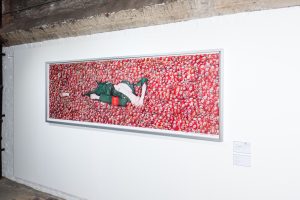 Totem Recollection 3, 2007, presents a near-lifesize female figure partially dressed in the green uniform of the Chinese Communist Party lying on a field of badges depicting Chairman Mao. The image evokes the suffering of those who experienced the Cultural Revolution, and the ways in which individual identity was drowned in a sea of propaganda. In the contrast between the erotic pale flesh of the figure and the incessant, overwhelming figure of Mao, Tain evokes the experiences of a generation of people, whose youth and energy was curtailed according to the demands of the Party. Although her chest is exposed, the woman covers her face with her hand, conveying, perhaps, a desire to lay bare her identity while ever conscious of the need for self-censorship.

‘The Cultural Revolution was an age of madness when females were completely masculinised with a phony propaganda appearance. I use the female nude to reveal basic physical and material desires, mocking the imprisonment of humanity that occurred during the Cultural Revolution when people were arbitrarily killed for random reasons. No respect was paid to human dignity, human rights, or life. The liveliness and sacredness of human life is a topic I seek to express through the depiction of female nudes in my work’.  Source: Interview with artist Tian Taiquan with OCULA magazine https://ocula.com/magazine/conversations/ tian-taiquan/ 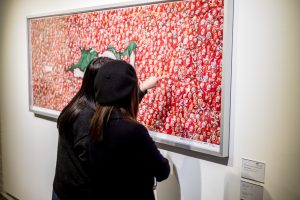