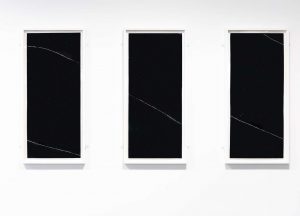 The Fog Series represents a common motif in Ma Qiusha’s work: windows. She sees them symbolically as a barrier, but at the same time a channel to understand the outside world.

From a distance the 3 panels of Fog Series appear to be monochromatic, however, on closer inspection, the dark surfaces are seen to be floral patterned and translucent, and rather than being inscribed onto the surface, the lines are in fact gaps between the areas of paint, revealing the underlying surface of the paper. This contrast between the delicate and domesticated, with the harsh sharpness of the black and white markings echo the ideas of Ma Qiusha’s work beautifully. Although better known as a multimedia artist, Ma’s Fog Series demonstrates her sensitivity to ordinary objects and the ways in which everyday materials may be emotionally charged. Ma used a lace curtain as a stencil, applying layers of paint to the fabric so that its pattern would be present but hidden on the paper. This painting explores the suppressed emotions experienced by many of her generation, as they seek to balance familial duties with a wish for personal freedom. The harsh white lines at once suggest a violent rupture and a fragile gesture of individuality.