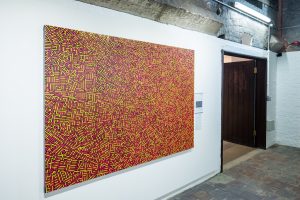 Lu Xinjian’s art and design practice hovers between representation and abstraction, aiming to convey the historical evolution of cities and their structures.

City DNA/Salford and Manchester presents a graphic view of the topography from the University of Salford campus to Manchester city centre, where the Centre for Chinese Contemporary Art (CFCCA) is located.  Working from aerial views from Google Earth, the painting began as a series of sketches, which were then made into a stencil using Adobe Illustrator. The final design of lines, curves, squares and circles was hand-painted. What is given in lieu of an accurate cartography is a sense of place – the vibe, rhythm or tempo of the area where Salford and Manchester meet. It was also made into a pink and blue wallpaper for CFCCA.

City DNA/Salford and Manchester is part of a larger body of work, which includes views of Beijing, Amsterdam, Groningen, New York, Shanghai, Hong Kong and Paris. This work is unique in its presentation of two city spaces.

This was an important moment for me, back several years ago when I was asked by the University to add a piece to their collection, and painting the CITY DNA/Salford and Manchester piece. Although I had begun to grow in recognition in Asia, this was one of the first times I had been asked by an institution in the UK to be part of their collection.
Lu Xinjian. 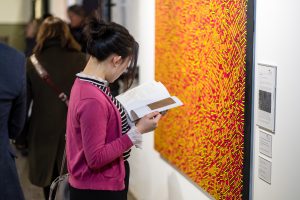 City DNA/Salford and Manchester was co-commission with the Centre for Chinese Contemporary Art (CFCCA) to celebrate both our partnership as well as CFCCA’s 30th anniversary in 2016.