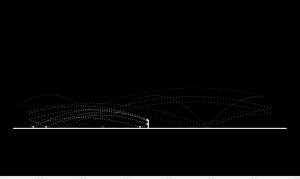 aaajiao, Tennis for None, 2016. Digital animation

Active online as a media artist, blogger, activist, artist and programmer, aaajiao is the virtual persona of Shanghai-based artist Xu Wenkai. Born in 1984 in one of China’s oldest cities, Xi’an, aaajiao’s art and works are marked by a strong dystopian awareness – his year of birth being the synonym of George Orwell’s classic allegorical novel. Many of aaajiao’s works consider new thinking, controversies and phenomenon around the Internet – with specific projects focusing on the processing of data, the blogosphere and China’s Great Fire Wall. Recent projects extend his practice into architecture, music, performance and design – capturing the pulse of today’s generation consuming cyber technology.

Tennis for None was first exhibited at Centre for Chinese Contemporary Art (CFCCA) in 2016, as part of Remnants of an Electronic Past, aaajiao’s first solo show in the UK.  Tennis For None is a reinterpretation of ‘Tennis For Two’ (1958) – one of the earliest examples of video game technology, which used a vacuum tube analogue computer. The game was a fairly simple tennis simulation, as two players used a joystick to pass a ball back and forth over a ‘net’ on the screen. aaajiao’s contemporary version re-imagines both players as machines, where an endless loop plays of a ball bouncing into infinity. A game, involving no-one, which questions the role and indeed existence of humans in an increasingly technological world.