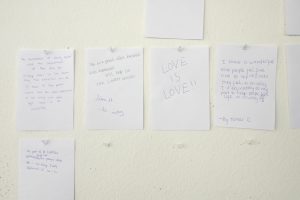 Socially Engaged Photographer Gwen Riley Jones discusses Salford Youth Council’s visit to the University of Salford Art Collection’s new store and Theirs, Yours, Ours: queer and non-binary perspectives on identity, currently on exhibition in the New Adelphi Exhibition Gallery until 30 September 2022.

In preparation for their visit to the art store, members of the youth council selected works that they would like to view, and why, from the online catalogue.

Harley, Member of Young Parliament for Salford, selected Happy Cat by Kip Gresham, 1981 because ‘it strikes the line of being indiscernibly abstract and being a mysterious image. It has the pansexual flag colours on it.’

During the visit the group discussed the artworks and the thoughts they provoked. Amber said, we were having a really interesting talk last week about this monkey on a tightrope – ‘you can only really go one way if you have lack of opportunities, you are stuck on this path and it’s like you are trying to fall off the path because you feel like its not for you sometimes, but you are stuck on it’.

Henrique selected Louise Giavonelli, Collar IV, 2016, and after initially viewing the painting online, was surprised about the size of the painting when he saw it, ‘you would expect that it would be a lot bigger’.

I asked Henrique if the scale of the painting changed the way he felt about it.

The group also visited Theirs, Yours, Ours: queer and non-binary perspectives on identity, currently on exhibition in the New Adelphi Exhibition Gallery until 30 September 2022. When we arrived we spent time looking at the work together and talking about what it meant to us.

Amber: ‘Yeah the chaoticness that being human is or can be, or the thoughts that can collect when people are questioning.’

What do you make of those paintings on the wall, behind the chair? Harley: ‘I feel the blue and orange one could be a similar theme of transition. Amber: ‘half and half’.

Amber – can I talk about that one [SHARP – Dancing with Elvis] because its all dark and then the last two photos are light cos I’m guessing its older and looks like a retro film, I’m guessing its like the darkness of the past and going to the lightness of now and like fighting for the future in rights and progressiveness.

They are in a closet, or they are trapped in something…

…so they are trapped inside their own home if they don’t feel safe or anything.