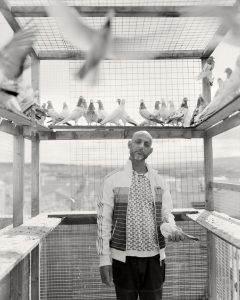 Bank Top, a collaboration with writer and academic Abdul Aziz Hafiz, examines the representation and misrepresentation of communities in northern England, focusing on the tightknit neighbourhood of Bank Top in Blackburn.

The work is a result of the Blackburn Museum & Art Gallery initiative Kick Down the Barriers, a project instigated in response to media reports portraying the town as the ‘the most segregated in Britain’. Seeking to challenge this narrative, the museum invited artists and writers to collaborate with residents of various neighbourhoods and create a robust and authentic representation of their communities.

Over the course of a year the pair worked closely with local inhabitants to explore their stories and experiences through a series of black & white portraits and accompanying texts. These highlight issues around social deprivation, housing, unemployment, immigration and representation, as well as the impact of past and present foreign policy. Their work counters simplistic generalisations and aims to provide context as to how these communities came together and a better understanding of how they thrive together now.

The project forms part of Craig’s wider work in the region including Thatcher’s Children (2nd place, Documentary Projects, 2021 Professional competition), an investigation into the chronic nature of poverty as experienced by three generations of one family and Sixteen, an ambitious project exploring the fears, hopes and dreams of sixteen-year olds across the UK. In 2019 and in partnership with the University of Salford Art Collection, Sixteen’s touring exhibition visited the New Adelphi Exhibition Gallery and Atrium on campus and two of Craig’s works were acquired for the University Art Collection.

Mike Trow, Chair of the 2021 Professional competition says: “What is so impressive about this project is the intent, dedication and understanding Craig brings to it. He has worked closely with the writer Abdul Aziz Hafiz to create a complete piece, tacitly acknowledging that for a project as sensitive as this, words matter. These are not people who necessarily asked to be photographed but Craig gained their trust. They look frankly to camera and we see a mutual understanding between documenter and subject. It is the moral weight behind this work that makes it so important and deserving of this prize.”

Craig studied Physics at The University of Salford in the 1980s but fell in love with photography when he joined the camera society in his spare time, regularly satisfying his interest in politics by shooting social issues.

“I went to university to study physics and came out as a photographer,” he said. “For me, photography became my passion and I really didn’t want to do anything else. It was somewhat of a university of life.”

He fully embraced his student days, taking the opportunity to meet people with varying interests. This included former Minister of State for Employment Alok Sharma, who was his “best friend all through university”.

After leaving Salford Craig went to live in London for a long while, kick-starting his career as a photographer for The Independent, before moving back to the North years later. Much of his work is still commissioned from London, as well as further afield in Paris and New York.

Photographer of the Year Craig reveals the past year has been both a challenge and a blessing, as it has given him time to pause and do valued research.  He also thinks this moment in history is an extremely monumental time.

“Coming out of Brexit and the pandemic, the social impact of the last three or four years is going to be phenomenal,” he said. “It is critical that people are out there photographing how we emerge out of this as a society. There are all sorts of things I feel are desperately important to record.”

Winners of the Sony World Photography Awards 2021 are revealed in a celebratory announcement video hosted by CEO of the World Photography Organisation Scott Gray and TV and radio presenter and author Konnie Huq. The video features interviews, behind-the-scenes clips and reactions from winning photographers and is available to view via worldphoto.org/ceremony-2021

Lindsay Taylor, Curator at Salford Art Collection, was also delighted to be a judge in categories aside from Photographer of the Year – you can see her interview in the announcement video.

“I am delighted on so many levels that Craig was selected as Photographer of the Year.  As one of the judges I had to declare a conflict of interest so can’t take any credit for him receiving the award!  However it is so well deserved.  Having worked closely with Craig on the Sixteen Project in 2019 I know how important it is to him to really get under the skin of his subjects, and I love his portraits of Maizi and Awais that now belong in our collection.  Quite apart from the fact he is an alumni of the University, what makes Craig special is that he is a photographer based in the North of England, whose work resonates across the globe.  He shows the world the reality of life for many people living here, but with a sensitivity and deep respect for his subjects that I feel is rather exceptional.” – Lindsay Taylor, Curator.