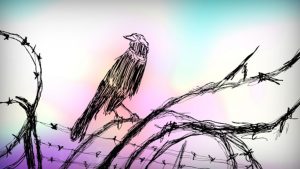 In collaboration with Castlefield Gallery, we are pleased to premiere Birds or Borders by Iranian-born, Manchester-based artist Parham Ghalamdar. Usually known for painting, Parham has recently been exploring animation in his practice. Here, he reflects on sound and vision from a painterly perspective with Lindsay Taylor, Curator, University of Salford Art Collection.

Birds or Borders is one of six new co-commissions for the Collection during Covid 19 – read more about the wider programme here, and more about Parham’s work here. The full video is available to watch online below, and will be exhibited at our New Adelphi Exhibition Gallery in 2021. It has also been selected for Warrington Arts Festival in September 2020.

Use the arrows in the bottom right to maximize the video player, and make sure your speakers or headphones are turned on.

Q&A With the artist and Lindsay Taylor, Curator, University of Salford Art Collection:

Lindsay: Hi Parham, can you start by telling me about your inspiration for the project?

Parham: Yes of course, I’d be happy to. The aesthetics of the short animation Birds or Borders were preliminarily inspired by the Protect and Survive public information series on civil defence, produced by the British government in late 1970s and early 1980s during the Cold War. The series was intended to inform British citizens on how to protect themselves during a nuclear attack, and consists of a mixture of pamphlets, radio broadcasts, and public information films. The Protect and Survive series had originally been intended for distribution only to educate the civilians, but due to lack of context and miscommunication, whether intentionally or mistakenly, they provoked public panic!

Lindsay: without giving away my age I have a vague recollection of that series – and being scared by them. I remember an impending sense of doom, though of course I was too busy being a child to take much interest – I probably saw them as modern day fairy tales! When we commissioned you, we asked you to respond to Covid 19 however you saw fit. Tell me more about your approach.

Parham: During the lock down each and every one of us has experienced a unique context in lack of freedom of movement: people were not authorized to leave their houses. However the restriction of movement is nothing new. Asylum seekers, refugees, immigrants and people holding week passports have been dealing with life- threatening forms of such limitations; Trump’s travel ban is an extreme example of it. Hopefully the Covid situation will help society empathise with people from disadvantaged backgrounds.

Lindsay: I mentioned fairy tales previously, and it strikes me that story telling is a really important part of your practice?

Parham: Yes that is right. The storytelling methods in the animation are incorporated from the Shahrzad character who is the muse of the One Thousand And One Nights myth. Shahrzad tells a fresh story every day to “forestall death, to postpone the day of reckoning that would silence the narrator” by postponing the punch line to tomorrow. This episodic approach of narrating crystalizes in the animation by picturing a situation and jumping to another one without an ending.

This introduces an opportunity; the animation doesn’t end and more content could be added again anytime. Jumping from one epigram to another and the way each episode connects to the next one, all together, create a mood as if one is watching TV and hysterically changing channels one after another, hoping that there was a good ending to the little absurdist epigram you just watched.

Lindsay: Quite early on in the process we had a conversation about the use of suspense in film making and storytelling, and I think it works really well in the animation.  Would you like to expand on that?

Parham: Suspense is a technique of promising to say I know something to the story that you don’t and if we keep watching/reading the story I promise to tell you the secret. What if I break my promise? It frustrates the audience. What if there are sequences of promises and each broken with a new promise?

I wanted to see how far I could push the suspense before it became exhausted? Could there be joy alongside the frustration? Such a suspense could be created with being playful with time. It is basically stretching time and breaking it: You have a long and repetitive scene and then a disruption, or the opposite. However, there is an intrinsic value to art that even if we experience frustration and disappointment with the art piece, there is still some level of joy and intellectuality to it.

Lindsay: I completely agree – and I certainly felt both joy and frustration.  As well as using your own drawings, you also use images found from the internet and stitch them together?

Parham: Yes, I find that searching the internet archives for ready-made videos for making video collages is a bit like hunting – it provokes a primitive sense of searching the forest, or the unknown territories, for the desirable prize or reward. Of course the internet is a chaotic ocean of information. Once the desirable material is found, putting together the collage of the ready-made materials with created drawings feels like putting the internet into order bit by bit.

We try to rationalize the connection of the things we perceive together even if those two things have come together randomly. Not every act of editing is montage. To montage is to put together two images to achieve the third invisible image. Studying Moscow’s film school VGIK which was the first film school, agitprops, Sergei Eisenstein’s Potemkin Battleship film and Kuleshov’s theories in montage are still highly relevant, even in the context of painting, for producing a disciplined image that functions the way artist expected and needed.

Producing the Birds or Borders wasn’t a straightforward process, it involved experimenting with the arrangement of the symbolic elements of fences, birds, landscapes and glitch voids to come up with the right pace to create a sense of deferment and frustration.

Lindsay: Until recently you have really concentrated on painting, I think this is only your second animation?  Can you tell us why this new direction?

Parham: The Webster’s New Collegiate Dictionary describes ‘absurd’ as a state, where man exists within an irrational and meaningless universe and in which man’s life has no meaning outside of his own existence. In such a world, the very act of searching for meaning pushes the curious man into a more unwanted conflict with his universe. That is the space where my paintings – and now expanded paintings/animations – happen. This is a restless struggle to find reason, order, and above all discipline.

A good example of such behaviour would be The Myth of Sisyphus. Sisyphus protests absurdity by embracing his fate, continuing it, refusing to resign. Perhaps I find painting and continuing to paint an act of co-operating with life without actually being able to come to terms with the displacement. My practice explores painting through a paradoxical trust and mistrust in relation to the aesthetics of Realism and 2D cartoons, and the possible absurdist method of switching between these two codes. Following my Absurdist agendas, the volume of the absurdity is so immense, it strips off elements of narration or storytelling, to encourage the painting/expanded painting/animation to develop its own identity.

Every time the timeline is switching between the two aesthetics of the stop-motion hand- made drawings and the glitching hazy landscapes, it looks as if the Sisyphus is rolling the stone up to the peak of the mountain, coming back and repeating the cycle. Every time the timeline takes on a quicker pace and gets intense, it looks like Sisyphus is rolling the stone to a higher peak this time.

Painter goes from point A to point B to create the static painting and it is experienced as a compressed parallel layers of information, perhaps like a time capsule, in a dynamic way at the flattened point of A+AB+B

Lindsay: As we discussed early in the project – there is a sense of your lived history in the work.  Can you tell us more about your experience?

Parham: As dissident diasporic Iranian-born artist here in the west, I cannot help but to notice the overlaps, echoes and reflections of parallel situations. Of course the Protect and Survive quickly remind me of references such as the air raid alarms, rations, public information broadcasts and a neighbour’s martyred son from the Iran-Iraq conflict – “the 18th deadliest conflict of the century”.  That’s where my local references of the past are organically aligned with my understanding of the new home, practically as a defence mechanism to avoid repeating the mistakes of the past and to situate myself in the current context.

Based on the American Heritage Dictionary, a highly used reference in USA, Middle East is “the continuing scene of political and economic turmoil” therefore conflict is not just one of the attributes but the very meaning of this region. (American Heritage Publishing Company, 2000).

Middle East, which is the south of nowhere and east of nothing, has seen so many conflicts, invasions, famines etc. on extreme levels that the residents have grown a working class survivalist mentality. Such way of thinking and processing wants everything all-together at the same time in the same place because there might not be another chance on another day, this is a maximalist behaviour. Iranians are used to bulk buying and storing even when there is no famine, simply the maximalist behaviour has stayed and has turned into misbehaviour now – or maybe it’s preparing for the next famine.

When one is in isolation, whether it was the bomb shelter during an air raid in the past or in quarantine due to the Covid-19 these days, one is in suspense. Such a situation could be interpreted as a temporary semi heterotopia, a place where the norm is on hold and normality is something in the past. One becomes nostalgic for just a couple of weeks ago when a previous abnormal situation seemed normal in comparison to the moment. Perhaps this suspense of narration has been the most important exploration of the animation. A situation to contemplate reality and sociality.