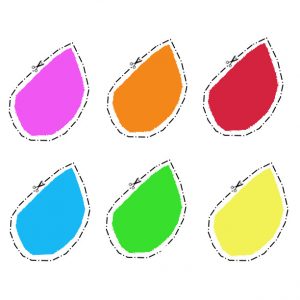 We’re pleased to be working with artist Jack Tan on one of six new artist commissions this Summer. His project Tale As Old As Time addresses important moments in Chinese civil rights history in the UK – read more about Jack’s project here.

The artist is withdrawing from completing A Tale as Old as Time due to allegations of institutional racism at CFCCA. He is part of a group of artists calling for a defunding of the organisation.

Although his experience of working with the University of Salford Art Collection is positive, he feels the commission is currently untenable because the wider University is represented on the board of CFCCA.

In our Q&A, Jack talks more about the tradition of ‘disaster ceramics’, the history of Chinese disasters in the UK and the ‘civil rights moments’ he is highlighting, as well as his background and practice – in conversation with Stephanie Fletcher, Assistant Curator, University of Salford Art Collection.

Please note, this article includes references to racist language and incidents. If you are affected by these issues, please refer to the resources section at the end of the page; alongside petitions and campaigns that you can take part in.

Stephanie: Firstly, can you give us an introduction to your practice and artistic background? How does this work relates to your research interests and previous projects?

Jack: I discovered art quite late and only started training in my early 30s. Before that, like any good Asian kid, I was supposed to be a lawyer. I went to Law School in Hull, then worked in various paralegal and legal secretarial jobs before training at a commercial law firm, as well as doing civil rights campaigning and pro bono case work alongside. I started doing pottery at a local arts centre and one thing led to another, and I ended up leaving the law to go to art school to study ceramics at Harrow/University of Westminster.

Since then I have mainly been creating art installations and performances that explore aspects of the law or social justice. For instance, I created a work called Karaoke Court in 2014 that adapted arbitration law in a way that allowed people to resolve real disputes under binding arbitration contracts by singing karaoke before a jury-audience who would decide the verdict. This reforms litigation as a hostile activity into a fun and conciliatory one. In another work called Four Legs Good, I took over the bottom floor of Leeds Town Hall for Compass Festival 2018 converting it, signage and all, into a working Animal Justice Court where we revived the medieval animal trials for a day with modern cases argued by real advocates on behalf of live animal litigants.

Right now, I am working on an intergenerational education project where we are creating a new game app together that allows the player to roleplay a non-human and to lobby local councils to change planning and environmental policies from the non-human person’s viewpoint. This commission, Tale As Old As Time, however takes me back to my first love which is pottery, but allows me to combine it with social justice concerns and my interest in critically examining the effects of law and government policy on the Chinese community in the UK.

Stephanie: Can you tell us a little more about the tradition of ‘disaster ceramics’ that this work continues?

Jack: Disasters have been depicted on ceramics for a long time but often from the perpetrator’s or conqueror’s point of view. You see this for example in ancient Greek or Roman vessels or murals of war or invasion. But I am interested in a 19th century British tradition and the visual impulse to commemorate major public disasters on everyday pottery. Teapots, mugs, plates and other vessels were illustrated with disaster events to raise money for victims, to campaign for political awareness or simply to commemorate and commit these events into a material that is as long-lasting as bronze or stone, but much cheaper.

Events such as the Peterloo Massacre of 1819, where cavalry troops charged into a large crowd protesting the Corn Laws and killed 18 people and injured 650, was remembered quite viscerally on ceramics. Major industrial disasters were also commemorated in pottery such as the Oaks Colliery Disaster of 1866 in Barnsley where 361 miners died in two massive methane explosions.  Tableware and figurative pottery was also used as awareness raising tools in political campaigns, notably the abolition of slavery movement in the early 19th century. This pottery, depicting slavery scenes of abuse and political slogans, circulated within domestic settings alongside pamphlets arguing for the abolition of slavery. The famous potter Josiah Wedgewood himself commissioned an anti-slavery medallion which he distributed freely in support of the anti-slavery movement. While it might seem like ‘bad taste’ now, at the time it was an important way to make sure that these stories were not forgotten, and remained a part of everyday life and history. The tea sets in this commission will depict disasters in a similar way, except they will use a more contemporary design language and commemorate my view of major events experienced by Chinese people in the UK. 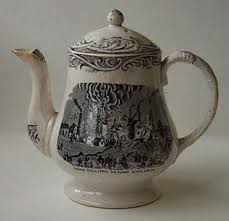 Commemorative pot from the  Oaks Colliery Disaster, Barnsley (1866). Over 360 men and boys were killed by an explosion – England’s worst ever mining disaster.

Stephanie: What are the other key moments in history that the works will discuss – and how has Covid 19 continued these narratives?

Jack: I am making five tea sets which are inspired by significant events in British Chinese civil rights history. But I make three caveats here. First, I am not a keeper of British Chinese history and consider that there are many histories of the Chinese in the UK. Secondly, what is significant to history is for the community to decide. However, events that appear in the tradition of commemorative disaster ceramics tend to be those that have gained visibility in the public consciousness through newspaper reporting. As such, I chose events that have been reported in the recent news. Finally there are of course more than five significant moments. But time and budget constraints meant that I had to choose only five. So this is really a snapshot of a political history of the Chinese in the UK from the viewpoint of an artist:

I see the way that Covid 19 has emboldened casual racism and violent racist attacks against Chinese, East and Southeast Asian people as a direct result of a history of anti-Chinese racism in the UK. Starting from the Opium Wars (1839-42), when the victorious British forced China to buy opioids in exchange for tea, porcelain and silk leading to mass drug addiction in the population, to the Ministry of Agriculture blaming Chinese restaurants for the national outbreak of Foot and Mouth disease in 2001, the Chinese, Chinatowns and Chinese bodies have been framed in the UK as containers of disease, crime, seediness, forgery/deception and clandestine or covert invasion. In an increasingly hostile environment against non-Whites and migrants following the Brexit vote and the election of an openly racist and homophobic Prime Minister, the racialisation of the coronavirus pandemic has given license for the latent racism in the general population to erupt into attacks against any person or business perceived to be Chinese.

Stephanie: can you tell me more about the images you have used? 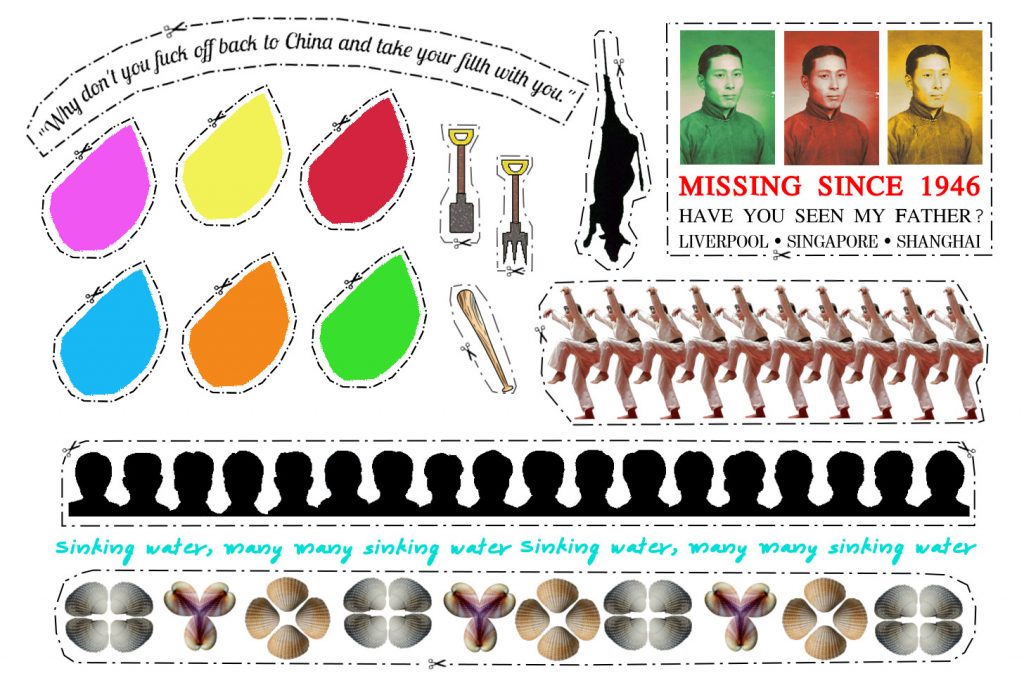 Jack: This image is a work-in-progress sample of a typical digital file that would be converted into ceramic waterslide decals. This is a process where artwork images are printed onto decal paper, a kind of transparent acetate-like film, using ink made from raw ceramic glazes. The individual images would then be cut out, immersed in water, and then slid onto pottery before being fired in the kiln. This digital sheet contains sample patterns and images that will be applied onto 5 bone china afternoon tea sets that will comprise the artwork Tale As Old As Time.

Starting at the top left corner:

Very much like the tradition of 19th century disaster pottery, these contemporary tea sets will similarly depict political events using the decorative motifs typically seen in ceramic tableware, such as the use of polka dot design, stripes, edging patterns, or pastoral and action scenes. The Covid 19 tea set for example will create a cognitive dissonance between the whimsy of its multi-coloured teardrops and attractive cursive writing, reminiscent of Emma Bridgewater pottery, with the tea set’s traumatic subject matter. The potential activation of this artwork through the rituals of taking afternoon tea also opens up questions about how and what it means to embody or ingest a culture of colonialism or institutional racism today.

Join the Crowdfunder – End the Virus of Racism