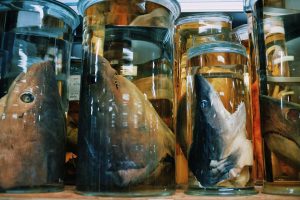 ‘The world was ending as it had been doing for millennia.’

In dialogue with a wide range of marine biologists, oceanographers, political scientists, neurologists and trauma specialists, Leviathan explores the notions of marine welfare, migration and mental health and their possible interconnections.

Leviathan is an ambitious ten-part film cycle conceived and directed by artist Shezad Dawood, the first two episodes (Ben and Yasmine) premiered at the 57th Venice Art Biennale and the third episode (Arturo) was shot on location in and around Venice. ​

Episode 1 of the cycle, Ben was commissioned by University of Salford Art Collection and Leviathan – Human and Marine Ecology, with support from The Contemporary Art Society. The film is a visual feast of found footage, carefully edited with new film and images which are set against spoken word (almost poetry) and accompanied by a powerful soundtrack.  Ben, the narrator of the film, recalls childhood memories of visiting his marine biologist father’s place of work, The Natural History Museum in London. These memories are intertwined with the back-story of a global disaster which sets the narrative of the Leviathan Cycle.

The project will embark on a three-year international tour, culminating in a final presentation of all ten episodes in 2020.

View the trailer for Ben.