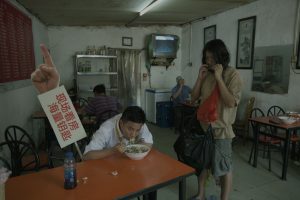 In mandarin with English subtitles, 47 min.

Haze and Fog by Beijing-based artist Cao Fei  is screening to coincide with our What’s in Store? exhibition and in association with the Centre for Chinese Contemporary Art (CFCCA). The film will be introduced by Marianna Tsionki, Research Curator, CFCCA and University of Salford.

Cao Fei mixes pop aesthetics, fantasy, and surrealistic references with documentary and social commentary to reflect on China’s rapidly changing economy and how it transforms the everyday lives and imaginations of its citizens.  The film examines notions of class and value structures, powerlessness and the masses as a neutral force in the modern day metropolis of China – presenting a move away from the traditional good versus evil heroic drama of zombie activity. The characters in the film are a different kind of ‘zombie’ – those who have lost their traditions in life and entered into a new fog and numb state of ‘neutral modernity’, struggling with contemporary daily routines.

Cao Fei’s 2014 film La Town, a story of a post-apocalyptic metropolis, which is made entirely from the filming of intricate hand-made sets and miniature models, is screening in our What’s in Store? exhibition.

Haze and Fog was co-commissioned by the University of Salford with the Centre for Chinese Contemporary Art (CFCCA), in partnership with Eastside Projects (Birmingham), Arnolfini (Bristol), Bath School of Art and Design and Bath University.