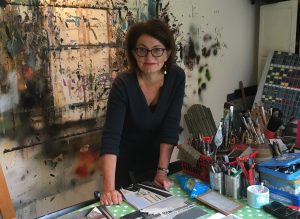 We are pleased to announce that Mark Devereux Projects’ Studiobook 2017 artist Mandy Payne is the recipient our Commission to Collect award. Following on from her recent project based around the iconic Park Hill estate in Sheffield, Payne will be making a new painting considering the recent impacts the tragic Grenfell Tower incident has had upon Salford’s growing housing developments.

Cranes, scaffolding and industrial machinery are all common sites through Salford, as redevelopment of Manchester’s neighbouring city moves at a relentless pace. Following the devastating tragedy of 14 June 2017, a growing crisis has emerged over the issues of cladding new and existing buildings. Mandy Payne’s commissioned work will aim to highlight the plight of the affected residents during this political wrangling.

“Mandy’s proposal fits brilliantly within our ambition for the art collection to ‘tell the story of now’. Mandy’s painting will reflect a particular moment in-time in Salford – highlighting the plight, and somewhat impossible dilemmas facing both the council and the community regarding cladding. Though rooted in place, the work will speak to the growing national crisis of a deeply divided country. The painting will be a major new asset for the Collection.”  Lindsay Taylor, Art Curator, University of Salford Art Collection

Sheffield-based artist Mandy Payne has received wide acclaim for her works surrounding the Park Hill estate (Sheffield), with works being selected for the John Moores Painting Prize (2014 & 2016), the Royal Academy Summer Exhibition (each year between 2014-17) and The Threadneedle Prize (2013). Focussed on locations that are in a transitional phase, overlooked or derided, Payne’s paintings aim to highlight the memories and experiences that these sites have or once had.

“I am thrilled to have been awarded the StudioBook Commission to Collect opportunity with the University of Salford Art Collection. Having spent an intensive fortnight with all the other applicants I was fully aware how stiff the competition was going to be. I am particularly excited about the project, as my proposal has strong links to my existing work but gives me the opportunity to experiment and develop it in a challenging new direction.”  Mandy Payne, StudioBook 2017 artist

As part of the Mark Devereux Projects’ StudioBook artist development programme, each of the twelve participating artists were encouraged to translate the wealth of information provided by the twenty-seven different speakers during the fortnight programme into an application for this opportunity.

“It was so difficult to make a decision this year as the standard of the proposals was incredibly high – everyone had clearly put into practice what they had learned at StudioBook. The variety of ideas, from live performance through to sculpture, video and installation also gave the selection panel much to debate and discuss. There were a number of proposals that we would like to have supported.”  Lindsay Taylor, Art Curator, University of Salford Art Collection.

Mandy Payne’s StudioBook 2017 Commission to Collect artwork will be unveiled as part of the launch of In Nothing Flat, featuring each of the twelve StudioBook 2017 artists. Taking place at Old Granada Studios, Manchester the exhibition will launch on Friday 3 November, continuing until Wednesday 15 November.