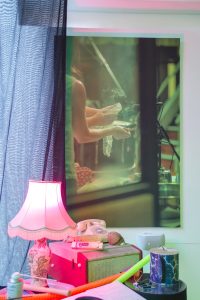 Samson Young, One of Two Stories, or Both (Field Bagatelles), 2017. Installation shot at CFCCA, 2017. Image by Constantin Brosteanu.

Samson Young: One of Two Stories, or Both (Field Bagatelles)

One of Two Stories, or Both (Field Bagatelles) is a newly commissioned radio series and gallery installation inspired by tales of Chinese migrants, presented initially as part of Manchester International Festival.

Ssound artist and composer Samson Young takes visitors and listeners on a journey inspired by the myths and legendary tales of 17th-century Chinese travellers making their way to Europe on foot.

Originally presented in front of a live studio audience and broadcast on FM and online from 30 June – 4 July, the radio series evolved into a multi-channel sound and visual installation at CFCCA. Elements of this installation will enter the University of Salford Art Collection after the exhibition.