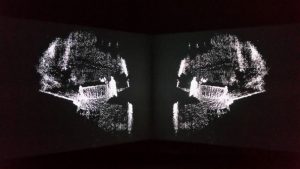 Brass Art’s Shadow Worlds | Writer’s Rooms: Freud’s House commissioned for the University of Salford Art Collection in 2016 will be exhibited at the XCoAX conference, Libson, 6 & 7 July 2017.

‘xCoAx is an exploration of the intersection where computational tools and media meet art and culture, in the form of a multi-disciplinary enquiry on aesthetics, computation, communication and the elusive X factor that connects them all.’ Taken from the xCoAx website.

Shadow Worlds | Writer’s Rooms: Freud’s House is an audio-visual installation created by Brass Art with composer Monty Adkins and programmer Spencer Roberts. The installation comprises a looping 4-minute film and uses footage captured via three Kinect laser-scanners of staged ‘sojourns’ by Brass Art at 20 Maresfield Gardens, the house Sigmund Freud occupied during the last year of his life in London. Using the laser-scanners Brass Arts captured intimate-scaled performances throughout the rooms, staircase and hallway, the artists developed a visual response to the notion of the uncanny using strategies of repetition and simultaneous ‘doublings’. During the residency in Freud’s house, ambient audio was captured simultaneously by electroacoustic composer Monty Adkins who recorded fleeting and involuntary aspects of the performances and coaxed sounds out of long-dormant objects.

The resulting work takes the form of a two-screen ‘double’ digital video installation. This pixelated and seemingly fragmented re-imagining of Freud’s house reveals exactly what is there and what is ‘unseen’; the Kinect footage appears to bisect walls and reveal the obverse of the scene. Measuring the space through their bodily presence and a virtual ‘peeling back’ of the architectural layers, Brass Art create a dynamic exploration of the domestic interior as a site of creativity. Experienced binaurally, the soundscape evokes the intimacy of being in the space itself.