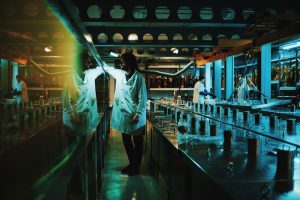 In May 2017 Art Curator, Lindsay Taylor attended the opening of the 57th Venice Biennale with Sam Ingleson, Academic Lead for Engagement in the School of Arts and Media.

The Venice Biennale is the most significant event in the contemporary art sector and we were thrilled to attend the opening events this year, in particular that of Shezad Dawood, whose work we had commissioned.

Leviathan by Dawood is on display at the Palazzina Canonica, on the waterfront very close to the Giardini, one of the two main sites for the Biennale.  The Palazzina has recently been restored, and this is the first time that is open to the public since the 1970s.  The building is on two levels and includes a courtyard. As with many buildings in Venice, it is worth a visit in its own right.

Dawood, (b. 1974, UK) is exhibiting the first part of his most ambitious project to date – a ten part film cycle, filmed over 3 years,  looking at some of the most urgent issues of our time: marine welfare, migration and mental health.  The first two films are launched at the Palazzina Canonica for the Venice Biennale, with the third episode due to launch in September.  Episode one of the cycle, Ben, was co-commissioned by University of Salford Art Collection with support from the Contemporary Art Society.  An edition of the film will belong to the University Art Collection.

Starting with the words ‘The world was ending as it had been doing for millennia’, the film is a visual feast of found footage, carefully edited with new film and images, including from the Natural History Museum in London.  The film is full of visual references, is rich in colour and composition and accompanied by a powerful soundtrack.  This crafted mix of imagery, spoken word (almost poetry) and sound creates a surreal and hypnotic experience, made even more dramatic by the history and gravitas of the building.

Upstairs there is a room displaying a number of paintings Dawood has created on Fortuny fabrics, depicting the items that a migrant or refugee might carry with them on such a journey.   In a further room, with windows that fill the space with light reflected from the lagoon, is an incredible sculpture On the Water.  This dramatic scene is incredibly beautiful and for me one of the ‘wow’ moments of the week – the detail and quality of this sculpture, and its location, far outweigh other sculptures by another well-known British artist with a solo show in Venice.  The second episode, shown in a building within the complex is slightly more narrative and hints at what is to come in further episodes.

It is also worth the boat journey over to Guidecca and the Fortuny factory.  Dawood is displaying 4 further paintings and a neon sculpture in their showroom and grounds.  The subject matter of items relating to migration, such as passports, mobile phones and wallets are made all the more potent by the sheer luxury and beauty of these unique printed fabrics and the splendour of the Fortuny store.

Overall the two exhibitions are elegantly and sensitively curated by Alfredo Camerotti.   There is so much visual and aural competition in the Venice Biennale and it is brave to work on the principle of less is more – but here that is a wise decision.  I am proud to have supported this epic artwork from the beginning and look forward with eagerness to see how the artist develops the cycle over the coming months and years.

More information about the wider project visit the Leviathan website.

View the trailer for Ben. Commissioned by University of Salford Art Collection and Leviathan – Human and Marine Ecology, with support from The Contemporary Art Society.