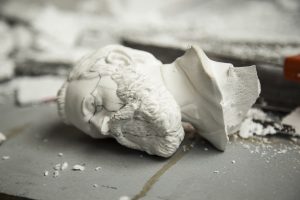 Join us on Thursday 22 September 2016 at 2.00pm 2016 for the launch of our major new public realm commission Engels’ Beard produced by Engine with Jai Redman as lead artist.

At almost five metres in height Engels’ Beard is a colossal sculpture  and also a unique bouldering wall at the heart the University of Salford’s Peel Park campus. The artwork was commissioned by the University through the art policy relating to the New Adelphi building, the new home for the School of Arts and Media.

Artist Jai Redman said the work used Friedrich Engels’ “signature magnificent beard as a symbol of wisdom and learning, while the climbing aspect came from a desire to make it an interactive artwork”.

University of Salford Chancellor, poet, writer and Scottish Makar, Jackie Kay MBE, has produced a poem in response to Engels’ Beard entitled Thinker. The last couplet of the poem will feature in the landscaping beside Engels’ Beard, with the rest of the poem found in the university’s Clifford Whitworth Library

Refreshments will be served in the New Adelphi building; where there will also be the opportunity to view The Making of Engels’ Beard exhibition, in the New Adelphi Gallery, featuring initial concepts, drawings and models of the artwork.