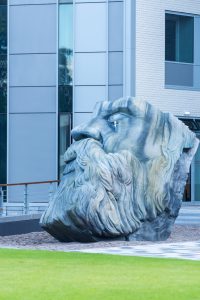 At the University of Salford there are three public art sculptures, namely Clasp by Karen Lyons, Untitled by William Mitchell and Engels’ Beard by Jai Redman

Clasp was commissioned for the inauguration of the Mary Seacole Building – a place of learning for nurses. Mary Seacole is a heroine of the Crimean War and an iconic figure for the nursing profession.

Clasp represents a nurturing gesture – it forms the interior space when two hands are gently clasped as if protecting a delicate life.

Produced with assistance by students from Albion High School, Salford.

Made in association with Architects Atherden Fuller Leng.

Opened in 1966 the Allerton Building was designed by Manchester-based architects’ practice Halliday Meecham. The practice commissioned the London based sculptor William Mitchell to produce a piece of landscape art to provide a point of interest in the forecourt of the building.

The three figures are each positioned ‘so that the morning and evening sunshines will fall on the faces of the figures’. Though untitled, names for the figures have been suggested including the Minut Men and Faith, Hope and Charity.

The sculptures were Grade II listed in January 2012.

Engels’ Beard is a sculpture and also a unique bouldering wall at the heart of the University of Salford’s Peel Park campus. The artwork was unveiled on 22 September 2016 and was commissioned by the University through the art policy relating to the New Adelphi building, the new home for the School of Arts and Media.

Friedrich Engels, German philosopher and co-author of The Communist Manifesto, wrote The Condition of the Working Class in England (1842-4) about the lives of the people of Salford and Manchester.

“Engels’ Beard is not a monument; rather it is a metaphor for the effort and struggle needed to pull ourselves out of ignorance and a direct representation of how we all ‘stand on the shoulder of giants’.” Jai Redman

An excerpt from Thinker written by Jackie Kay, Chancellor and Writer in Residence, in response to the sculpture accompanies the piece on stonework.

More can be found on this sculpture on the Engels’ Beard page.